In 1984, ‘Social Security’ a new wave band from the Netherlands paid homage to Bagley on their album Dancing Head with a track titled ‘Desmond Bagley’. The track was written by lead vocalist and lyricist Josh Haijer who was inspired by the heroic protagonists of novels written by Bagley and Alistair MacLean. 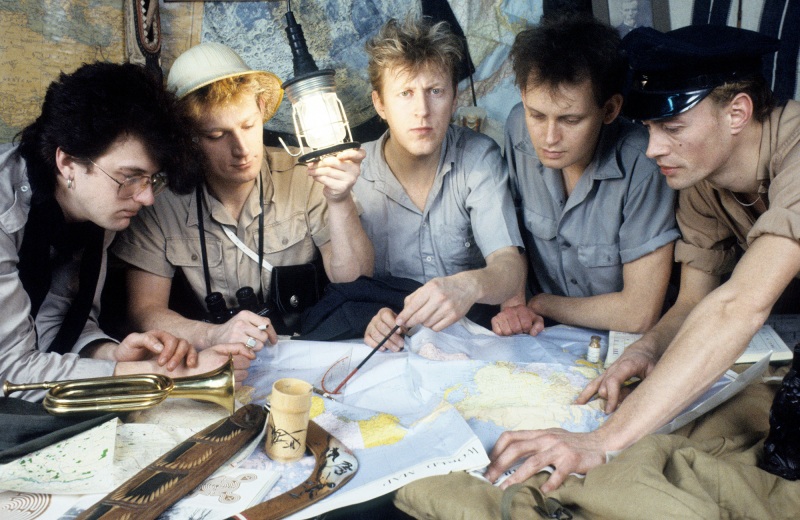 I started out on the title Bagley, MacLean. I was really into these kinds of books then, heroes, cold, heat, far away worlds, impossible missions. The truth is, this is not one of our strongest moments, this song. We played the song a few times live, changed it around and around, but it didn’t work out the way I wanted it. But when our ‘discographer’ discovered it, he wanted it on the remastered album.

Thriller heroes are exemplars of adventurous, courageous and resolute high-minded individuals who are referenced within the lyrics of this song: ‘Somewhere in the middle of a wild South China Sea’; ‘Hero broke his left arm when he tried to save the Captain’s daughter’ and the wonderful musical hook of ‘Page 95, this man is still alive’.

The promotional photo of the band from their 1985 album Homesick Home represents the spirit of explorers and adventure, which is captured by the earlier lyrics of the Bagley track. Josh says:

My parents-in-law lived in Hong Kong during that period. My wife and I regularly visited them and every morning there would be the South China morning Post delivered in their hotel room, probably from there I took The South China Sea into the lyrics. And of course, it’s a real ‘Bagley sea’ don’t you think…Like in the ‘Night of Error’ Polynesian island. I was at the Cook Islands once and I remember thinking: this could be a place for a Bagley thriller.

‘Somewhere in the middle of a wild South China Sea

sails through a dark night

I guess this really could be the start of a new Bagley book!

The ‘Desmond Bagley’ track, can be purchased or streamed for free (limited plays) by clicking the link. So why not click on it now to open another window and play the track whilst reading the rest of this article about the band and their discography.

The original line up of Social Security for their first single Hate, released in 1980, was as a four-piece band: Martin Ploeg (keyboards); Bob Schaafsma (bass); Joop Mols (drums) and Harrie Zandstra (guitars & vocals). At the time of the band’s formation all the members were ‘on the dole’ and the music was a bit ‘punk’ so Social Security seemed an appropriate name. Later the band’s name was changed to The Security, Josh explained the reasoning:

Hard to pronounce for some (radio) people. We heard the strangest things, for instance Soulshow Security, and that was not what we were. And while we were also changing the course of our music with the album Happy Tunes, we shortened the name. 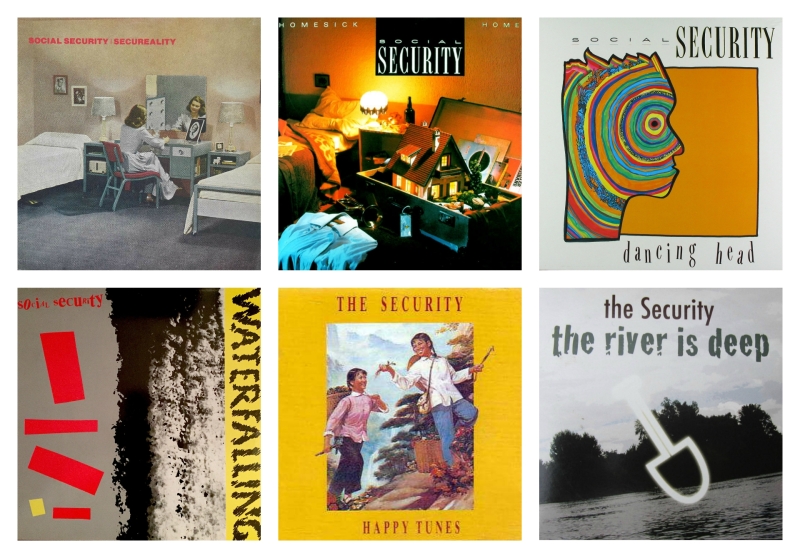 For their first album Secureality (1983 – Nova Zembla Records) the line up saw the addition of Josh Haijer on vocals, with Jan van Dijk replacing Bob Schaafsma on bass and Willy Huisman on synthesizers & vocals. Martin Ploeg played synthesizers on demo’s and live-tracks.

1988 saw the release of the album Happy Tunes under the band’s new name of ‘The Security’, with the line up of: Josh Haijer (vocals); Klaas Post (guitar); Harrie Zandstra (keyboards & vocals); Jan van Dijk (bass) and Kid van Hees (drums). This year also saw the release of 7” singles Ammunition, Dancelot and Colourblind.

In 2011 The Security released the CD EP The River Is Deep and in 2015 remastered and expanded digital versions of the Social Security albums Secureality and Dancing Head were released, with the same for Waterfalling in 2016.

After 5 albums and 15 singles the band is still together after all these years and Josh stills plays with the band who occasionally play with former members. Their last Netherlands gig was in Groningen during January of this year and in their heyday yearly gigs could total up to 150. Their success travelled far beyond the the Netherlands with record releases in Germany, Sweden and the Philippines. Josh adds:

Since 1980 we have also played together in a sixties tribute band The Happy Tunes. Lots of fun because you might say in a way the sixties is our ‘roots’ (Radio London, Caroline, BBC). We don’t do the usual 3-chord stuff (though there’s nothing wrong with that of course), but there are not many bands who play MacArthur Park (Richard Harris), Eloise (BarryRyan), Mellow Yellow by Donovan and songs by Beatles, Beach Boys, Nirvana (UK), the Who and so on in one set I presume. The band is still playing, but since a few months I’m not in it anymore. Trying to concentrate on writing and composing for a new album. Still involved though. We’re happy doing this ’sidestep’ so that is why we called our last Security album ‘Happy Tunes’.

I asked Josh about their genre of music and influences:

People and critics always said we had a sound of our own, which fitted well enough in the ‘new wave’ of that moment – but when we played our songs last January the songs still went down very well with the audience. I guess there’s some honesty and love for music in general involved. I am almost 65 and grew up with pirate stations like Radio London and Caroline. That was my youth so to say. And you will find that back in our music. In reviews the critics said they could find traces of the Beatles (of course), Flock of Seagulls, Peter Gabriel, Split Enz. You could do worse.

We only hit the Top 100, at no. 99, once – we always destroyed our commercial success with weirdness and strange chords or lyrics. That was our problem, but I’m very happy about it now.

For those of us who lived through the cultural impact that new wave brought through the late 1970’s to mid 1980’s listening to tracks by this band will bring a plethora of memories flooding back. For those readers that want to reconnect with this post-punk genre, the band’s remastered and expanded tracks and albums can be found via their main Social Security Bandcamp page or their Social Security / The Security  Facebook page.