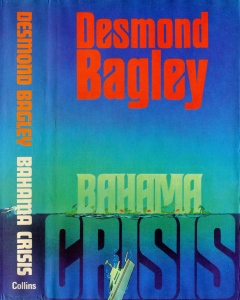 Bahama Crisis was published in 1980 with a cover design by Donald McPherson.

‘The Mangans, having fought on the losing side of the American War of independence, sailed to the Bahamas where they settled and prospered.

Now several generations later, Tom Mangan heads a lucrative business dedicated to the gratification of thousands of tourists – mostly American – who can afford the price of his luxury hotels. Tom’s future looks even brighter with the injection of fifty million dollars of new capital provided by the Croesus-rich Cunninghams of Houston, Texas. The day Tom Mangan clinched the deal with his friend Bill Cunningham should have been the happiest of his life… but it was the worst.

First, tragedy struck at the heart of his family. Then a series of misfortunes and disasters followed one another – unexplained fatal accidents, mysterious epidemics, sabotage – in short, everything calculated to keep the tourists away.

Was this simply a chain of unfortunate coincidences? Or was it, as Tom Mangan was beginning to suspect, evidence of a conspiracy to bring him down – or something even more horrifying? When his wife was brutally kidnapped and he learned the startling nature of the ransom demand, Tom knew for certain, even if the police thought otherwise. He knew that a crisis loomed in the Bahamas, and that his life would not be worth the proverbial dime until the elusive and ubiquitous man who called himself Robinson was cornered and stopped – dead! For one man only knew what Robinson looked like: Tom Mangan. And no one had a better reason to have him caught. And so the hunt was on. From the Texan Bayous to a culminating boat-chase through the maze-like waterways of Grand Bahama, the deadly game of hide and seek played itself out relentlessly.’