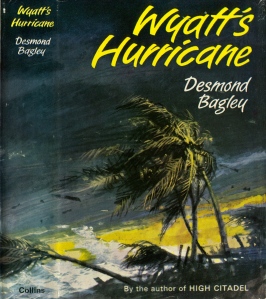 Published in 1966 with a cover design by Pino Dell’Orco.

‘A U.S. Naval aircraft on a routine weather patrol in the Caribbean encounters Hurricane Mabel. There is nothing abnormal about Mabel except her ferocity; she should pass harmlessly among the islands; but David Wyatt, a civilian weather expert whose family have lived for centuries in the region, has developed a sixth sense about hurricanes. He is convinced that Mable will change course to strike the island of San Fernandez and in particular its capital, St Pierre.

Scientific evidence is against him; the Commander of the U.S. Base refuses to evacuate; and Wyatt’s lone voice is suddenly overwhelmed by a cataclysm of another sort. From the hills a rebellion against the tyrannical dictator who rules San Fernandez sweeps down on the threatened city of St Pierre.

Tormented by anxiety for the safety of the American girl he has come to love, eager to see liberal rule replace tyranny, determined above all to secure the evacuation of St Pierre and save its inhabitants, Wyatt pits himself against seemingly insuperable odds, aided only by a small and diverse group of English and American civilians — and by Hurricane Mabel herself.

How he accomplishes his objectives and harnesses Mabel to the rebels’ victorious cause makes this dramatic and sweeping thriller Desmond Bagley’s best and most suspenseful yet.’

The Eye of the Hurricane