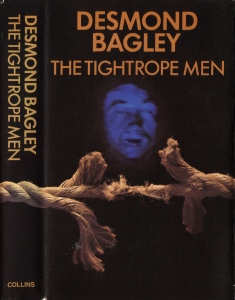 The Tightrope Men was published in 1973 with a cover design by Graham Miller.

‘When Giles Denison woke up with a terrible hangover he found himself in a strange hotel in a foreign town. When he saw his reflection in the bathroom mirror, he knew sheer terror. For the face he saw was that of another man!

This is the startling opening of Desmond Bagley’s latest and most accomplished story. Why had Giles Denison been transformed into Dr H. F. Meyrick, a famous scientist of Finnish origin? Who had kidnapped him from his modest Hampstead flat and transported him to a luxurious Oslo hotel, and to what end? From Norway to Finland and across the border into Soviet Russia, Denison is caught up in a hair-raising adventure from which he cannot escape. He is compelled to play out to its climactic conclusion the dangerous role assigned to him by those responsible for this charade, and so expose the identity of those who want to eliminate him.

Few readers will disagree with the Sunday Times’s statement that ‘in this sort of literate, exciting, knowledgeable adventure story, Mr Bagley is incomparable.”