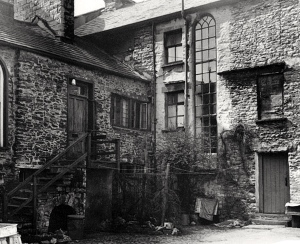 The Bagley’s house at Stramongate was located in one of Kendal’s old yards opposite St. George’s Theatre. Bagley’s father, John, took employment at the theatre working as a scene shifter, whilst his mother, Hannah, ran lodging accommodation at their cottage. Such was Hannah’s reputation for providing good accommodation and food, that many of the actors in the touring companies boarded with the Bagley family.

One such visitor was the actor Basil Rathbone, later famous for his portrayal of Sherlock Holmes in the feature films of the 1940’s. It was on Rathbone’s knee that the young Desmond Bagley was ‘dandled’. The famous Shakespearian actor, and cousin of Rathbone, Sir Frank Benson, also boarded with the Bagley family. In November 1926, Benson fell down the front steps of the Bagley’s house, suffering a head wound during the fall that required twenty-three stitches.

The young Desmond Bagley started his schooling at the Dean Gibson Roman Catholic Primary School in Kendal [1]. He hardly had time to settle into his education when in 1929 his father and mother, both Lancastrians, relocated their family back to Lancashire. They followed other members of the family into the catering business and opened a fish and chip shop in Bolton. Although they started the business at the beginning of the great depression, it was to ultimately prove successful.

Bagley’s schooling continued at the St. Peter and St. Paul Catholic Elementary School in Pilkington Street. Born with a speech impediment Bagley’s childhood was not unhappy, though his stammer marked him out as different amongst his peers. He later said of his impediment:

The child who is different, in any way, stands out from the crowd – he really is different. The crowd as it turns out, does not like differences. [2]

In 1936, and in a reasonably good financial position, the family moved to Blackpool to start a new business venture. Moving into 48 Lord Street they used the premises as both a family home and boarding house. Bagley was placed into St. Joseph’s College to continue his education, but the combination of his stammer, the lack of friends and a busy business household isolated the teenager. Luckily, he was to find sanctuary in Blackpool Central Library, where he discovered the work of H.G. Wells. It was intensive reading, solitariness and introspection, which conditioned him in such a way that writing became his easiest form of self-expression. 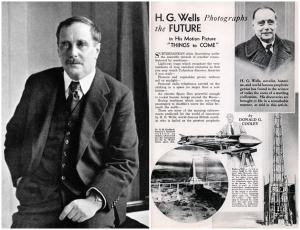 Bagley was drawn to the science fiction fantasies of H.G. Wells, which led him to discover Wellsian philosophy, and as an ‘omnivorous’ reader he discovered the strange, varied and complex world in which he lived. Drawn increasingly to the role of science in the affairs of man, he read works on the physical sciences, biology, language, communication and the social sciences. He had always nurtured an interest in mathematics, which had been fostered by one good teacher throughout his schooling, and in reality, he was self-educated in Blackpool Central Library far in advance of his peers.

He later recalled a conversation he had with his mother whilst walking down the stairs one day, she had asked her young teenage son what he wanted to do with his life, he replied without hesitation:

I want to be a writer. Galsworthy’s dead and there’s only Somerset Maugham left, so there’s a chance for me. [3]

Next: Employment, wanderlust and adventure in the Sahara

3. ‘Desmond Bagley’, a pen portrait written by the author in May 1973 for the original publication of The Tightrope Men.

From ‘The Life and Work of Desmond Bagley Exhibition’, first exhibited at the Guille-Allés Library, St. Peter Port, Guernsey – 10th May – 9th June 2018.