Unknown to many was the fascinating journey that led to this point in Norman’s life. Educational scholarships for art, employment as a cabinet joiner, manuscript writer and calligrapher, cartographer for Ordnance Survey, personal map maker for General Eisenhower and photo-reporter covering the repatriation from concentration camps.

Norman illustrated many book jackets and covers, notably those for Desmond Bagley and Alistair MacLean novels, also many others and those needing artwork of flora and fauna.
Norman’s daughter, Sarah has created a website detailing her father’s remarkable life and work, compiling details from autobiographical notes left by him. 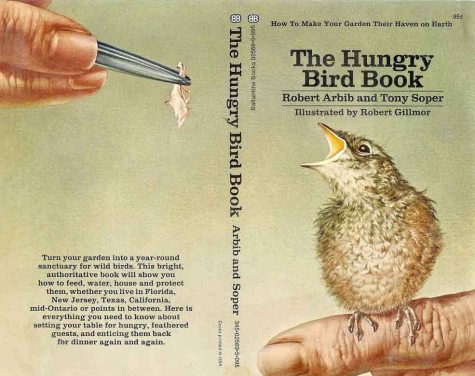 Sarah recalls that the hand depicted in the illustration on the Running Blind book jacket was her father’s own distinctive hand. This was a general feature of his work when he had to paint a hand and a similarity can be seen in the cover design of The Hungry Bird Book. Norman had a number of props at home and although Sarah does not remember the knife (sgian-dubh) in the Running Blind illustration being one of those props, she does remember the full set of Wilkinson Sword military swords, another iconic brand illustration by her father [3]. The autobiographical notes are reproduced below:

‘The following was written in his own (modest) words, which I recently discovered on various handwritten scraps of paper, so I have just copied what he said about himself.’ (S. Starsmore)

I was born on 9th July 1913, within the sound of Bow Bells. I had a sporadic formal schooling – scraped past a Christ’s College exam to get into Haverstock Central in Chalk Farm, London. Once established that I was, academically, a non-starter, I sat for three “Trade” scholarships: Junior London Art, Junior Trade and Goldsmiths. I won all three and chose the Junior Art. Went to Hammersmith School of Art on a grant, but left before a year was over, since my expenses topped my grant.

I got my first job in the cabinet making department of Heal’s of Tottenham Court Road, where I became a pretty good joiner. After two years, a chance event made it possible for me to change over to becoming Heal’s manuscript writer and calligrapher. Nearly five years of this made me a reasonably good scribe.

Regular evening classes during those years enabled me to win a Senior London Art Scholarship to the Central School of Arts and Crafts, Southampton Row, London. At the termination of this course I won a further extension scholarship, but was simultaneously offered a teaching post at the same school, which I took.

All of this ended with the outbreak of war.

I joined the Ordnance Survey as a Cartographic Trade Hand, which automatically enlisted me into the Royal Engineers, based in Southampton. In 1942, UNRRA (United Nations Relief & Rehabilitation Admin) needed a map-man for their Rhine Barrage project and bought me out. In 1944, the American Forces, who wanted nothing to do with UNRRA’s Rhine Barrage, did however badly need a cartographer for the operations room at HQ in France, and once more I was bought out. In September 1944 I went to Versailles – a British Civilian in American uniform, and an equivalent commission (rank), to join the Operational Analysis Team of G.5 SHAFF. This period also saw me employed for a while as General Eisenhower’s personal Map Maker. Royal Engineers, based at Southampton.

After the war had ended, UNRRA took over much of the work hitherto handled by the US forces, and they needed a photo-reporter in the field, covering repatriation from concentration camps, welfare, tracing bureaux, etc, to which post I was now assigned, covering public relations stories for official publications such as Life, Time, Ebony and others.

I was invalided out in 1947 with impaired use of my hands due to nerve damage. With the hand condition responding to treatment, I joined up with Beverley Pick, OBE – industrial design, model making, mural painting, etc., for work with Ideal Home, B.I.F. and similar exhibition work. We did a great deal of work for the Festival of Britain in 1951 Iron & steel Pavilion, including a 60ft, three-dimensional mural (bas relief carving augmenting the painting), illustrating all the known methods of making steel.

I left Beverley Pick in 1952 to join Artist Partners Limited, as a still life artist, for advertising. Work during this period included illustrations for Cadbury’s Dairy Milk (some of the original posters depicting the glass and a half of milk pouring into the chocolate bar), the original wrappers and posters for Rowntree’s Fruit Pastilles and Fruit Gums, Polo Fruits, Foxes Mints, the crossed swords for Wilkinson Sword, many Guinness posters, Danish Bacon, Cape Fruit, Heinz Tomato Ketchup and Salad Cream, Consulate Cigarettes, Royale Lemon Meringue Pie, Fisons Rose Feed and many others.

I gravitated towards wildlife illustration, and after writing and illustrating my first book: How to Draw Insects, I illustrated many wildlife books (see list), being called upon increasingly to paint fish, culminating in a three-year project producing all 300 illustrations in the large hardback book The Fresh and Saltwater Fishes of the World. I also illustrated special issue postage stamps for the Falkland Islands, Trinidad and Tobago, and first day covers for Crown Agents to accompany Royal Mail stamps illustrating British fish.
I retired to the Isle of Wight at the end of 1983 where, although retired, my interest veered towards illustrating large watercolour landscapes of lesser known parts of this beautiful Island. [2]

The information and images, which can be read directly from the website here, are reproduced with the kind permission of Sarah. I recommend visiting the website to view more of Norman’s beautiful illustrations.

Next: Explore the Audio books publications

1. ‘Royal’ is still a well-known brand in Iceland, produced by Agnar Ludvigsson ehf. in Reykjavík, its versions of ‘Royal Instant Pudding’ and ‘Royal Baking Powder’ are firm staples of the Icelandic larder.