Flying Stories – Breathtaking stories of adventure in the air, is a collection of writing on wartime and civil aviation, it comprises of a few short stories but mostly extracts from the works of authors. Published in 1982 by Octopus Books, a leading publisher of illustrated books, it was edited by Hayden McAllister and features illustrations by artist Trevor Newton.

Chapter One of Desmond Bagley’s novel Wyatt’s Hurricane has been extracted and published under the title ‘The Eye of the Hurricane’. Accompanying this extract is an illustration showing the wingtip of a Lockhead Super Constellation, marked with the United States Navy insignia [1], being struck by lightning. 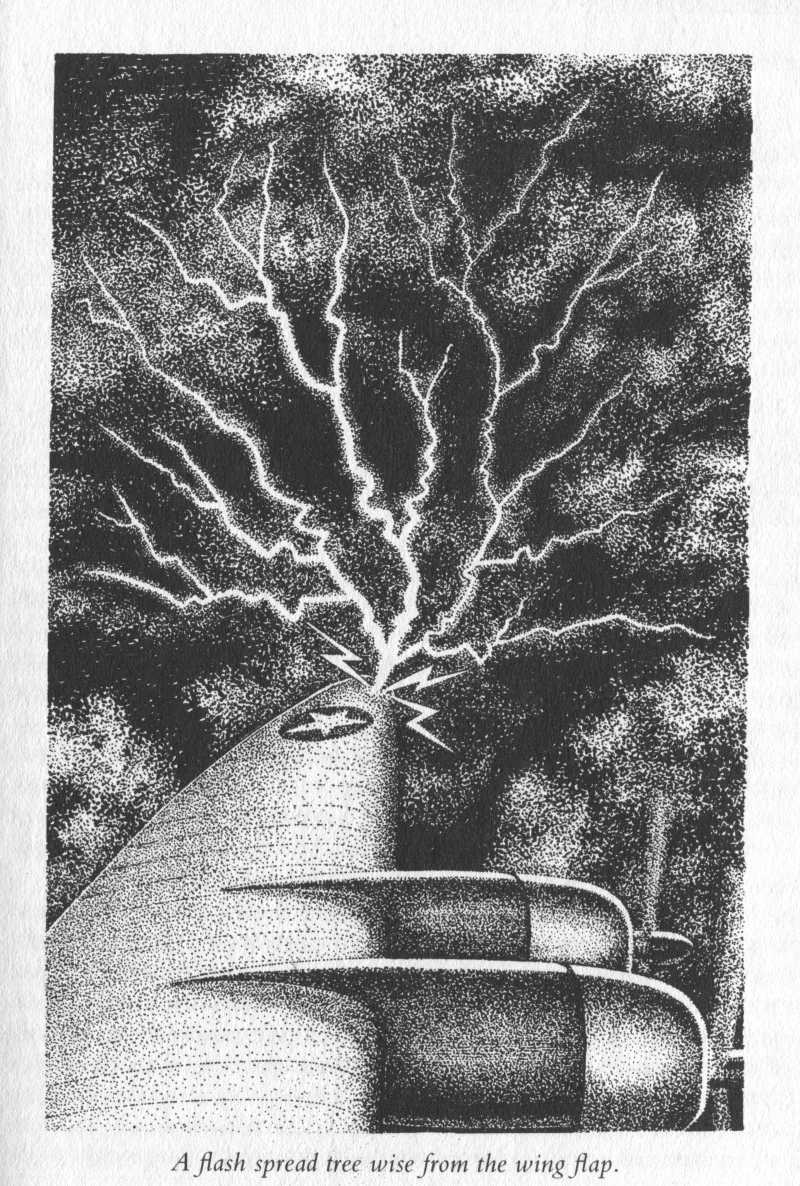 Trevor Newman was born in Lancashire in 1959, he studied History of Art at Cambridge University and later became the first full-time teacher of the subject at Eton College. His work has been commissioned, exhibited and sold by Christie’s, published by the Oxford University Press and has appeared in publications as diverse as Country Life, Harpers & Queen, The Independent on Sunday, The Literary Review and The Bookplate Collector’s Quarterly [2]. As a popular illustrator of children’s books Trevor also illustrated some of The Animals of Farthing Wood series by Colin Dann.

Hayden McAllister includes a short story of his own ‘Courage Beyond Measure’, other short stories include:

‘There’s nothing like a Spitfire’ by George Beurling and Leslie Roberts (from ‘Malta Spitfire’); ‘The Battle of Britain’ by Wing Commander H.R. Allen (from ‘The Penguin Book of Air Warfare’); ‘Spitfire Squadron: Buck’s Story’ and ‘Paul’s Story’ by David Guthrie (both from ‘Spitfire Squadron’); ‘Adventures and Reflections of a Flying Doctor’ by Michael Wood (from ‘Go An Extra Mile’); ‘Long-Range Intruder’ by Wing Commander Bob Braham (from ‘Scramble’); ‘Destination Berlin’ by Richard Pape (from ‘Boldness Be My Friend’); ‘By Airship Around The World’ by Winifred Finlay (from ‘Famous Stories of Airship and Balloons’); ‘Late For Dinner’ by Captain W.E. Johns (from ‘Biggles Learns to Fly’); ‘Tuck’s Luck’ by Larry Forrester (from ‘Fly For Your Life’) and ‘The Curtain Raiser’ by Ralph Barker (from ‘The Ship Busters’).

This article was originally posted on bagleysrunningblind.info on 24th May 2016 and migrated to thebagleybrief.com on 5th September 2016.