The book jacket for Domino Island has shaped up very nicely indeed. Not only does it include a great quote from the author Mike Ripley, who reviewed the book in the January edition of his column Getting Away With Murder, but it also carries a great review quote from award winning author Lee Child.

‘A vintage Bagley scenario of siege, jeopardy and explosive action’

‘Like a dream come true – an undiscovered Desmond Bagley novel…

and it’s a great one!’ Lee Child

Lee Child is the pen name of British thriller author James ‘Jim’ D. Grant, who is perhaps best known for his incredibly popular series of novels featuring the former American military policeman Jack Reacher. For two authors of such renown to back this novel confirms, if confirmation were needed, that readers are in for something special when this previously unpublished novel is published on 9th May 2019.

The jacket was designed by commercial book designer and photographer Stephen Mulcahey. Stephen, in addition to designing this cover for HarperCollins, has for many years worked in-house for Pearson, Titan books, Carlton Records, VCI Entertainment, Orion, Penguin Random House, Headline and Transworld and has previously designed covers for the novels of Lee Child, Frederick Forsyth, Andy McNab, Alison James, Lauren North and many others. Stephen’s portfolio of cover art and photography can be viewed on his website.

The jacket also displays a portrait of Bagley taken in Strängnäs, Sweden in May 1972 by photographer Bengt-Ove Tideman. The image was taken at the home of Bagley’s close friend Iwan Hedman, aka Iwan Morelius, two months after he submitted his manuscript ‘Because Salton Died’ aka Domino Island to his publishers. Used by Collins Publishers as a publicity image for the release of The Tightrope Men in 1973, the photograph was again used in promotion material for the release of The Snow Tiger in 1975. There is more information about this publicity photograph and Bagley’s visit to Strängnäs in a previous Bagley Brief feature article, and you can read more about Iwan Morelius on Nigel Alefounder’s site here.

Also worth checking out is the HarperCollins Publishers Indie Thinking website, who recently published an interesting conversation with Michael Davies, in which he talks about his role as ‘curator’ of Domino Island and how he approached finishing a ‘lost’ Desmond Bagley novel.

Apropos of book jackets and cover art, the Running Blind covert art gallery has been updated with some more foreign edition covers, the number archived now having reached forty-nine. Each edition is described in more detail on the Editions page, where you will find some interesting and, in the case of the Estonian oddity shown below, more unusual designs. 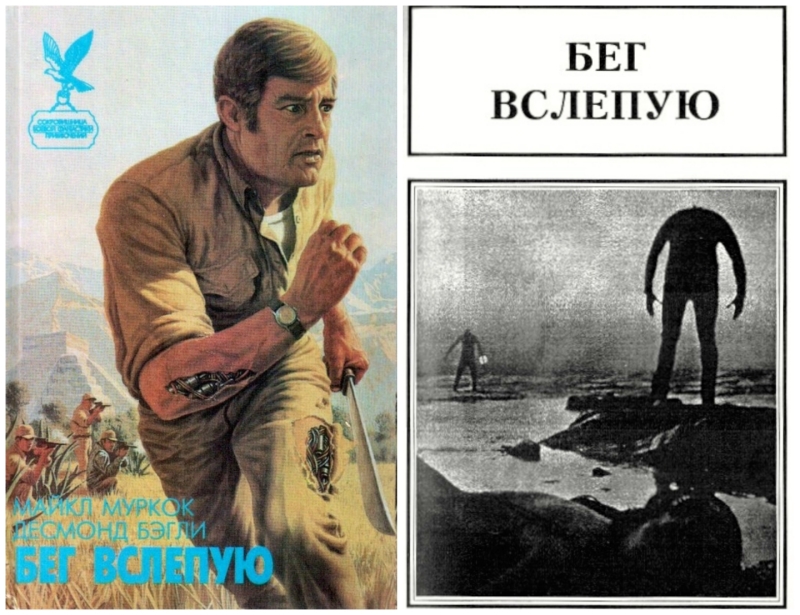 The Scandinavians love their books and a particularly nice Norwegian hardback edition, published in 1982 by J.W. Cappelens, Oslo under the title Flukt i blinde, displays the original UK first edition cover artwork designed by Norman Weaver. This edition is bound in red leather with gold gilt lettering complete with Bagley’s signature impressed in gold gilt on the front cover.

The 1972 Danish hardback edition Blind flugt, in brown quarter leather binding with gold gilt lettering, was helpfully published with the  map of Iceland shown below. This was one of only two editions published with a map, the other being the American Harper & Row, Perennial Library edition, published in 1984, which included a map drawn by the artist David Yeadon.

So why not take a few moments to browse through the Running Blind covert art gallery and maybe pre-order your copy of Domino Island (ISBN: 978-0-00-833301-0) from HarperCollins Publishers  here.