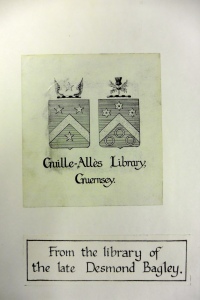 My new friends at the Guille-Allés Library in St. Peter Port, Guernsey found something special in their storeroom recently. As I mentioned in a previous post, the library has an interesting history as well as a special connection to the Bagleys. In 1984, the year following the author’s death, his widow Joan Bagley, donated books from her husband’s personal reference collection to the library. The ethos behind this donation was that when Bagley was alive he often gave friends access to his collection and Joan wished this to continue after his death.

The books, numbering approximately 600, had formed just one section of Bagley’s own reference collection and covered a variety of subjects including computing, mathematics, statistics, science, philosophy, military history and wargaming. In February 1984 the books were catalogued and added to the library shelves of the Guille-Allés.

Over the intervening years Bagley’s reference books have filtered through the library system, some remain on shelves in the lending library waiting to be discovered, some have been relocated, some replaced and, in some cases for those books rarely borrowed, some have been archived and moved to storage.

Now, 34 years after they were first catalogued, the staff at the library have discovered a number of boxes in their storeroom containing 54 archived books from the Bagley donation. All of the books carry a bookplate ‘From the library of the late Desmond Bagley’. Together with the library staff I helped relist these books, and whilst sorting through the boxes I came across a couple of surprises.

When Bagley’s short story ‘My Old Man’s Trumpet’ was published in Argosy – The Short Story Magazine in January 1957, it contained a short biography of the author:

Desmond Bagley is an engineer, has worked in the Rhodesian asbestos mines and Orange Free State goldfields. He now lives in South Africa and cultivates orange trees; he likes good food, quiet conversation, W. H. Auden, and watching the sun go down over a cold gin. He is engaged at present in the study of symbolic logic and the training of an Alsatian bitch. [1]

In the collection of books at the Guille-Allés I came across the following book: An Introduction to Symbolic Logic by Susanne K. Langer (New York, Dover Publications Inc., 1953). This is no doubt one of the original books that Bagley was studying back in 1956 when he penned that biography for ‘My Old Man’s Trumpet’.

Interestingly I also came across Roots of Strategy by Major Thomas R. Phillips (Ed.) (Harrisburg Pennsylvania, The Military Service Publishing Company, 1941). This book was marked ‘Johannesburg Public Library’, and Bagley no doubt brought it with him to England, via Italy, when he left Johannesburg in 1964. I couldn’t help thinking about the possibility of overdue library fines that may have accrued for this book over 54 years.

I also discovered that one of the books: Lawrence and Oppenheimer by Nuel Pharr Davis (London, Jonathan Cape, 1969) bears Bagley’s signature hidden behind the library due date label.

In 1936, aged 12, Bagley discovered Blackpool Central Public Library and was drawn to the science fiction works of the author H.G.Wells. He recalls:

The impact of the writing of Wells on an imaginative boy was shattering. From thenceforth I read one of his novels every day until I had exhausted the supply. At first I was drawn to his scientific fantasies. But this was merely the introduction to Wellsian philosophy and soon I was immersed in his more serious work such as: The Story of Life which he wrote in collaboration with Huxley; The History of the World, The Work, Wealth and Happiness of Mankind, that marvelous review of the thirties, The Shape of Things to Come, and many others. [2]

H.G.Wells had an interest in miniature wargaming, in fact he has been credited with inventing the concept of recreational wargaming.

Sitting around after dinner one night with his friend Jerome K. Jerome, the pair began firing a toy cannon at toy soldiers, eventually making an impromptu competitive game out of it. Convinced that with some rules and a little more variety he could make a structured experience of it, Wells – an admirer of Kriegsspiel as a concept – decided to write what would become known as Little Wars.

The game was based around two concepts: that units and terrain would be represented by miniaturised models (or at least something lying around that resembled a hill or horse), and that the movement and interaction between the game’s units would be determined by a relatively simple set of rules. [3]

Little Wars was published in 1913, under the full (now dated) title: Little Wars: a game for boys from twelve years of age to one hundred and fifty and for that more intelligent sort of girl who likes boys’ games and books.

H.G. Wells had a great influence on the young Desmond Bagley and perhaps it was no surprise that Bagley himself would take up an interest in wargaming in later life, as can be seen from these books in the collection.

The recently discovered reference books from Bagley’s collection reflect some of his great interests, which also included mathematics, science and military history.

It was a real treat to discover these books and those interested can view a full list of the titles by clicking here.