Naust, the Nordri travel agency, souvenier shop and the bookshop in Hafnarstræti

In Chapter 9 Bagley describes how Stewart handles his appointment in the souvenir shop of the Nordri Travel Agency in Reykjavik.  Mentioning a number of buildings Bagley leaves us enough clues to be able to identify the locations in this part of downtown Reykjavík. Extracts of the novel are reproduced below with their likely locations:

The Nordri Travel Agency was in Hafnarstraeti. I parked the car in a side street near Naust and walked down the hill towards the centre of town.

Naust, the Icelandic word for boathouse, was a restaurant situated in an old wooden building at Vesturgata 6-8 in Downtown Reykjavík just south of the harbour at the western edge of the Miðbær district. Built by Geir Zoëga in 1882, in the Danish-Icelandic style as a single building, Zoëga extended the house  in 1897 building a fish warehouse on the West end wall. Extensions to the building finished in 1902 and in 1915 part of the building housed a shop Geirsbúð. [1]

The Zoëga family played important roles in the capital, an entrepreneurial family involved with fisheries, trade, farming, insurance and tourism.

Restaurant Naust was founded in the autumn of 1953 by seven men: Ásmundur Einarsson, Ágúst Hafberg, Eyjólfur Konráð Jónsson, Hafsteinn Baldvinsson, Geir Zoega jr., Sigurður Kristinsson and Halldór S. Gröndal. Halldór had recently returned from abroad where he had pursued studies in hotel management and catering. Geir Zoëga jr. was instrumental in the venture and had managed to persuaded his father to establish the restaurant in the old fish warehouse.

The restaurant opened on 6th November 1954 advertised as ‘Opið allan daginn, alla daga’ (Open all day, every day) and ‘Um 50 rétti að velja daglega’ (About 50 dishes to choose daily), a copy of the menu from 1958 can be viewed here [2]. Naust was decorated in a nautical style with old ship masts, bells and name-plates retaining the historical interiors.

One of the oldest and long-established restaurants in the City it operated for over 50 years gaining a reputation for excellent food introducing dishes from all over the world including Russia, Austria, Germany, Italy, Spain as well as offering traditional Icelandic dishes. The former President of Iceland Ásgeir Ásgeirsson hosted a number of banquets at the restaurant to entertain visiting Royal dignitaries; in 1956 King Friðrik IX of Denmark, in 1957 the Swedish King Gústaf Adolf Vi and President Kekkonen of Finland and in 1967 Harald, Crown Prince of Norway. [3]

In 2007 the Economic and Commercial Counsellor’s Office of the Embassy of the People’s Republic of China announced that the building had been acquired by several Chinese Europeans. Acquiring a 10 year lease the consortium invested about 1 million Euros in the property with the aim of designing the largest and best Chinese restaurant in Iceland [4]. Opening as the Great Wall in 2007 a number of interior and exterior changes were made. An article published in the newspaper Morgunblaðið on 9th March 2008, which can be viewed here, showed images of the restaurant as it was in 1979 and after the changes in 2007. Just ten days later an article appeared in Fréttablaðið [5] reporting that the restaurant had been raided by Police and employment officials, its owners being under investigation for human trafficking offences. Workers at the restaurant had paid to enter the country illegally, been living in the premises under poor conditions and their salaries were being paid back to their employers and/or an intermediary.

Walking down the hill of Vesturgata you arrive at the busy square of Ingólfstorg, one of the oldest quarters of the Icelandic capital. Continuing into Hafnarstræti you approach the junction of Naustin, and situated on the north-eastern corner of this junction is Hafnarstræti 5. The ground floor of this building currently houses the gift store Lundinn, the upper offices accessed from a doorway to the right of the gift store currently house offices of the Icelandic Bank Landsbankinn.

In 1969, during the time of Bagley’s visit the ground floor of this building fronting the roads Hafnarstræti, Naustin and Tryggvagata housed a number of businesses including a food store, laundry, barbers and a tourist agency called Ferðaskrifstofa Zoëga [6]. Records also show a branch of the gift store Rammergerðin, who had their main branch situated further down the street at Hafnarstræti 17 and had small shops in Hótel Sögu and Hótel Loftleiðir at the time. [7]

Rammagerðin (Iceland Gift Store) was established in 1940 by Johannes Bjarnason who had started a business framing pictures and paintings at Laugavegur 53. The following year he moved the business to the cellar of Hotel Hekla where he remained for the next three years before finally moving to Hafnarstræti 17. The company grew steadily after 1949 when they hired a trained frame maker from Germany, who worked for the company for two years teaching the staff to make and decorate frames. The business moved to Hafnarstræti 19 in 1972 and has since relocated now having two branches located at Skólavörðustígur 20 and Bankastræti 9. The production of frames ceased and the company focussed on selling souvenirs, crafts and wooden goods, which form the backbone of their business today. [8]

I came into Hafnarstraeti and ducked into a bookshop opposite Nordri. There was a café above the shop with a flight of stairs leading directly to it so that one could read over a cup of coffee. I bought a newspaper as cover and went upstairs.

It was still before the midday rush so I got a seat at the window and ordered pancakes and coffee. I spread open the paper and then glanced through the window at the crowded street below and found that, as I had planned, I had a good view of the travel agency which was on the other side of the street. The thin gauze curtains didn’t obstruct my view but made it impossible for anyone to recognise me from the street.

Of the three book shops in the street the most likely one Bagley was referring to was Bókabúð Norðra at Hafnarstræti 4. It was the first one he would have encountered walking down from Naust into Hafnarstræti, it was directly opposite the ground floor gift store of Rammagerðin, which also had Ferðaskrifstofa Zoëga located in offices in the same building. It was also possible to have a view from the upper floor windows of the busy street below and the northern entrance to the busy square of Ingólfstorg. It also fits in with the later description of the Russians leaving the area:

They all set off up the street towards Posthusstræti and I followed…At the corner of Posthusstræti two of them got into a parked car and drove away, but Ilyich turned smartly right across the street and headed at a quick clip towards the Hotel Borg.

Bókabúð Norðra advertised its opening on 24th September 1950 [9] and in February of 1969, the year of Bagley´s visit, the shop advertised a book market specialising in Icelandic, Danish and English books [10]. The shop finally closed a year later on 17th January 1970 [11] and it is probable that Bagley took the name of the book shop Norðra and substituted it for Zoëga in renaming the travel agency Ferðaskrifstofa Norðri.

Though Bókabúð Norðra closed in 1970 the premises was taken over by another two booksellers, firstly Bókaverzlun Snæbjarnar who open a second premises in the street (this store now renamed Bókabúðin is located at Bergstaðastræti 7) and latterly Bókavarðan, an antiquarian book shop (now renamed Bókin and located at Klapparstígur 25-27, Reykjavík).

The building at Hafnarstræti 4 has also been home to the Irish bar The Dubliner and since August 2012 has been the location of a Bar called Dolly owned by Dora Takefusa, a former television show host in Iceland. [12]

Research cannot verify a café ever being located on the upper floor of Bókabúð Norðra, though there are recollections of a gallery being located upstairs [13]. There are a couple of possibilities: 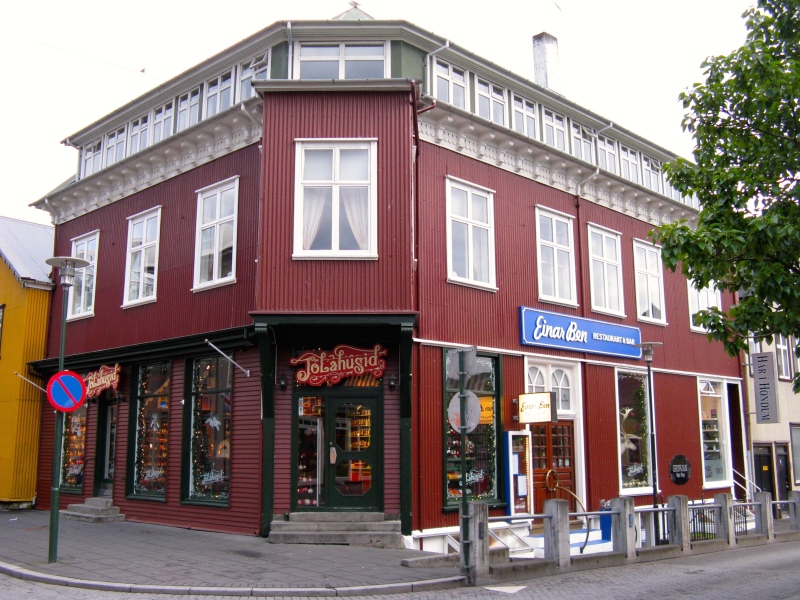 Bagley’s description of the café appears to match a restaurant on the upper floor of the adjoining premises at Veltusund 1, now a restaurant called Einar Ben. With its entrance in Veltusund the restaurant is accessed via a staircase leading directly to the floors above Hafnarstræti 2, now a shop called Jólahúsið. The view from within matches the one previously described of the crowded street below (Hafnarstræti & Ingólfstorg) as well as a view across to the gift shop and the site of the travel agency.

In 1961 an article in Vísir reported that both Hafnarstræti 4 and the upper part of Veltusund 1, previously the location of an old restaurant Heitt og kalt (Hot and cold), were sold at auction together for the sum of 2.5 million króna [14]. This indicates the two buildings were indeed connected in some way, though over the years both interior and exterior alterations have changed the layout of the properties. Another article published in Alþýðublaðið locates the restaurant Heitt og kalt  at Hafnarstræti 4. The restaurant, founded in 1930 by Elizabeth Sigurðardóttir, offered a hot two-course meal all day for only one króna [15]. There is, however, no evidence currently available to suggest a restaurant was operating in the premises at the time of Bagley’s visit.

I gulped my coffee and went downstairs to lurk at the newspaper counter while observing my friends through the glass doors of the bookshop. 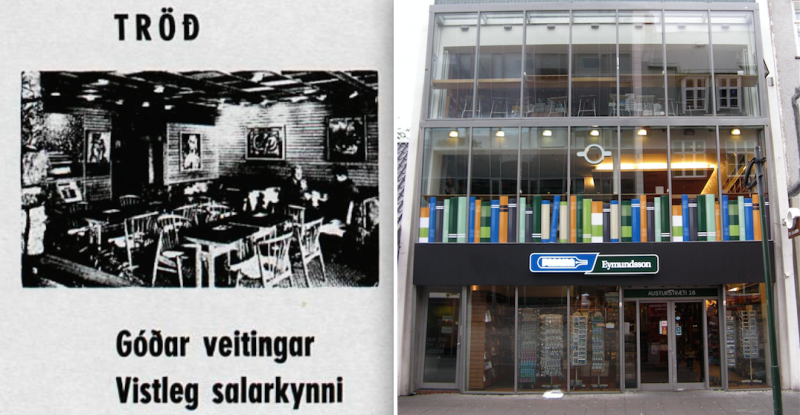 At the time of Bagley’s visit there was also a café / restaurant called Tröð, located above the bookshop Bókaverzlun Sigfúsar Eymundssonar in the nearby street of Austurstræti (Austurstræti 18 – shown above). This kaffihús, also accessed by a separate staircase [6], can be seen in an advertisement published in Stúdentblaðið on 1st December 1970 [16]. This presents us with the possibility that Bagley may have combined the different locations into one narrative.

Café Tröð closed in December 1977 [17] and the premises, acquired by Eymundsson, was assimilated into the main bookshop later becoming a book café. The structural alterations enabled the café, today a branch of Te & Kaffi, to be accessed via a communal staircase giving access to both the bookshop and the café. An additional seating area offers a view overlooking the busy street of Austurstræti and located at street level inside the premises by the large glass entrance doors is a newspaper stand.

In the BBC Scotland television adaptation it was Austurstræti that took the place of Hafnarstræti as the location for the café (Hressingarskálinn) and the fictional tourist agency Nordri, which they renamed ‘Nordli’. More can be read about the filming location here.

Next: Discover the history of BBC Scotland’s tv adaptation of Running Blind