Arriving in Austurstræti, and prior to entering Hressingarskálinn (Hressó), Stewart purchases a copy Vísir from a newspaper boy. The part of the newspaper boy was played by Þórður Þórsson, who at the time of filming was nine years old. 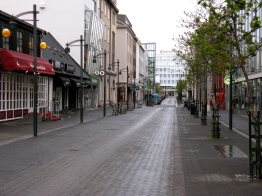 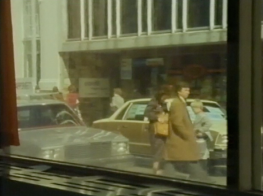 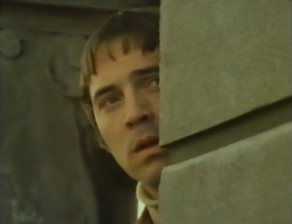 Speaking with Þórður about his role he recalls:

I believe I was recommended by a friend of my parents, a Director of one of the theatre’s in Reykjavík. I was there for a day and got to watch the filming of the indoor scene in Hressingarskálinn and the scenes with me in it. It was a nice experience, but I was probably too young to understand how big this was, and ‘world fame’ was around the corner. I was paid well (I remember it was the first time I was given a 5000 Icelandic króna note) and spent it all on toys and candy. I can’t remember if I got any special attention after it was shown on TV, but I’m sure I must have bragged about it to everyone. [1]

Speaking further with Þórður he confirmed that the friend of his parents who recommended him for the role was Vigdís Finnbogadóttir, later to become the fourth President of Iceland serving in this post for sixteen years. As mentioned in another location article it was Vigdís who suggested Ragnheiður Steindórsdóttir apply for her role in the television adaptation. This article can be found here.

Hressingarskálinn (The Refreshment Lodge) opened in 1932, located at Austurstræti 20 it is one of the oldest buildings in Reykjavík tracing its origins to the 19th century. Hressó has been a gathering place of writers and intellectuals over the decades. Many of Reykjavík’s best known authors sought shelter, nourishment and food for thought within its walls. Among Hressó’s best known regulars was the modernist poet Steinn Steinarr (1908-1958). “I get my higher learning in cafés” answered Steinn Steinarr, when it was implied that he spent too much time in the city’s cafés [2]. A sentiment I wholeheartedly concur with.

Stewart follows Ilyich from Austurstræti into Pósthússtræti, stopping briefly on the south-eastern corner by a column, which is part of Austurstræti 16, now the bar Esja. Austurstræti 16, also known as Nathan and Olsen house or Reykjavík Pharmacy, was built in 1917 after a fire in 1915 destroyed the previous building. Previously Thor Axel Philip Jensen, a Danish entrepreneur who emigrated to Iceland, operated his shop Godthaab (Good Hope) at this location. The building takes its name from the pharmacy that operated there for a number of years. The building has also been associated with Nathan and Olsen, two Danish entrepreneurs who arrived in Iceland in 1912 [3]. Guðjón Samúelsson whose other notable designs include the main building of the University of Iceland, the National Theatre of Iceland and Hallgrímskirkja church, designed the building.

Stewart then enters Hótel Borg, more can be read about Hótel Borg here.

Þórður Þórsson, who played the role of the newspaper boy, was paid 5000 Icelandic króna for his part, just under £25 at today’s exchange rate, which in 1978 was no small sum. Þórður was also given a copy of the specially printed ‘prop’ newspaper as a keepsake, find out more about the prop newspaper here.