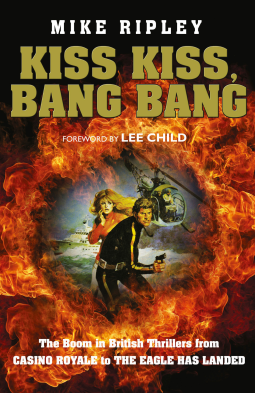 I’m taking a moment to eulogize about Mike Ripley’s recently released book Kiss Kiss, Bang Bang, for which Mike has stamped our passport for an immensely enjoyable and nostalgic journey through the development of the British thriller.

The period of dominance by British thriller writers, from the mid Fifties through the ‘purple patch’ of the Sixties and Seventies, are revisited punctuated by a timeline of contemporary events, which fuelled the considerable output of our best known and some lesser known thriller authors. Some of those lesser known authors who have now faded from our memory like the covers of their dog-eared paperbacks. Our literary journey is made more enjoyable by some iconic cover art, more bullets and bikinis than you can load into Desmond Bagley’s trebuchet from High Citadel.

Bagley features, how could he not, as one of the main players during this period and I read with interest Mike’s thoughts, noting his point that Bagley hadn’t been the first author to use Iceland as a setting for a thriller.

I’ve recently written about other novels from this period that use Iceland as a setting: The Arctic Patrol Mystery featuring the Hardy Boys [1969]; and The Chill Factor by the author Derek Lambert, writing as Richard Falkirk [1971]. Mike points out, however, that one predates Bagley’s Running Blind and the two I’ve just mentioned. The Brotherhood written by Alan Williams, published in 1968, later retitled The Purity League, uses Iceland for a key setting in the story in which the protagonist Magnus Owen, a hard-drinking journalist, ‘flees for his life from the puritanical and very right-wing Brotherhood’ across an Icelandic glacier.’ The glacier is Vatnajökull and Owen flees from the Brotherhood’s Hæli (retreat) at the foot of the glacier, the action then moving on to Poland for the denouement.

Having already researched the Icelandic newspapers for this period on Bagley business I wondered why I hadn’t come across a mention of The Brotherhood before. So I rechecked the archive, and confirmed that there is indeed no mention of this novel, which is a little unusual considering part of it takes place in Iceland. More unusual when you consider that one of his earlier novels, Barbouze [Platskeggur], had been serialised in the Icelandic newspaper Morgunblaðið starting in June 1967, so it wasn’t the author himself that was the problem.

I’m making an educated guess here, but I think the problem might have been in the nature of Williams’ right wing and puritanical organisation ‘The Brotherhood’; readers might have mistakenly made a connection to ‘The Independent (later changed to International) order of the Good Templars’, part of the temperance movement in Iceland. Quite unlike Williams’, rather violent organisation, they supported democratic values such as equality and brotherhood and campaigned for a total abstinence from alcohol believing that drinking could not be controlled unless production, import and sale of all alcohol were stopped [1]. It is probable there would have been members of the Good Templars with connections to the Icelandic publishing houses at that time and perhaps caution was exercised in not publishing the novel. The Icelandic IOGT, still in existence today, continues to promote a worthwhile vision of ‘life for all human beings free to live up to their fullest potential, and free from harm caused by alcohol and other drugs.’

In 1908 the Icelanders held a referendum on a proposal to outlaw all alcohol from 1915, about 60% voting in favour, and the women of Iceland, who still didn’t have the vote, were vocal in their support as well. Support for prohibition dwindled over the years, and within a decade red wine had been legalised, followed by spirits in the 1930’s, though unusually prohibition for full-strength beer remained in force until 1st March 1989, now celebrated as Bjórdagur (Beer Day). The story of alcohol prohibition in Iceland is an interesting one and you can read more about it here.

What I find most interesting about Kiss Kiss, Bang Bang, is that it is full of interesting facts and I really enjoy a well researched book where the footnotes are just as interesting as the main body of text.

Mike’s book contains an extremely well researched and informative biographical guide to the leading players and supporting cast of authors in the world of adventure and spy fiction from 1953 to 1975, Alan Williams included. Readers will feel pangs of literary nostalgia as they are reminded of the adventurers and spies who have captivated our thoughts over the years. Mike helpfully, and skilfully, guides the reader through the smoke and mirrors of author pseudonyms, enlightening us with revelations we feel we should have either known or guessed.

This page-turner, filled with factual gems, incisive observations and humorous asides, is without doubt required reading for the thriller enthusiast or literary researcher. Through reading Mike’s book I’ve discovered authors in the genre I was unaware of and the queue of novels backed up on my eReader is now quite substantial.

Kiss Kiss, Bang Bang is clearly a labour of love and perhaps even Mike’s magnum opus. Something remarkable will have to come along this year to prevent this from being my top-notch non-fiction book of 2017.

Click the title to find the purchase link for Kiss Kiss, Bang Bang and those Icelandic Noir fans who wish to read Alan Williams’ book The Brotherhood will be pleased to know it’s available as an eBook here. For those wishing to find out more about the Icelandic IOGT and how they are tackling the problem of alcohol and drug abuse in Iceland the link is here.