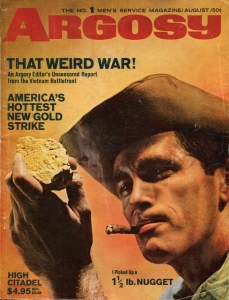 Bagley’s High Citadel appeared as a book bonus in the August 1965 issue of the American magazine Argosy – The No.1 Men’s Service Magazine, Volume 361, Issue number 2, (not to be confused with Argosy – The Short Story Magazine, published in London by The Amalgamated Press Ltd, latterly Fleetway Publications Ltd).

The condensed story was published with an illustration by Mike Mikos and was accompanied by the following introduction:

High Citadel – Are medieval weapons a match against the military might of a modern Communist force? High in the Andes Mountains, a handful of beleagured civilians put this question to the supreme test – with astonishing results.

Argosy Magazine was the creation of the American author and publisher Frank Andrew Munsey (1854-1925). Originally designed as a boys adventure magazine, titled Golden Argosy, it was renamed The Argosy in 1888 in order to target an older audience. In 1896 the magazine switched to a quality fiction format of 192 pages on seven-by-ten untrimmed pulp paper, giving Munsey the recognition of creating the genre we know today as ‘pulp fiction’. In six years the magazine went from publishing a few thousand copies per month, to well over half a million. The success of the magazine was partially due to the variety of recurring characters it published, such as Tarzan and Zorro. The publication was later renamed Argosy Magazine. [1]

In 1942, a number of years after Munsey’s death, the family of titles owned by his company were purchased by Popular Publications Inc., which had been founded in 1930 by Harold Goldsmith and Henry “Harry” Steeger. Popular Publications Inc. have published well known authors such as Raymond Chandler, Ray Bradbury and Erle Stanley Gardner within the pages of it’s own titles. [1]

The biggest change to the magazine came in September 1943 when it stopped being an all fiction magazine shifting to a ‘slick’ magazine with mixed content. Gradually over the following 35 years the percentage of fiction decreased further and further until the magazine became a ‘men’s magazine’, which included book bonuses by best selling authors. [2]

On 21st October 2014 Steeger Properties, LLC, acquired the Copyright’s to nearly 150 pulp magazine titles that were originally published by Popular Publications Inc. With the use of modern technology the company are reintroducing the fiction held within these titles thus making these classic hard-boiled detective, mystery, western and science fiction stories available for generations to come.

The full list of properties held by Steeger can be viewed here and I am indebted to them for allowing me to publish the images accompanying this article.

Other novels by Bagley published as a book bonus in the magazine include: Landslide – April 1968, Volume 366, Issue number 4.

The illustration by Mike Mikos is shown below ‘There was an almighty crash as the firing arm shot up’. 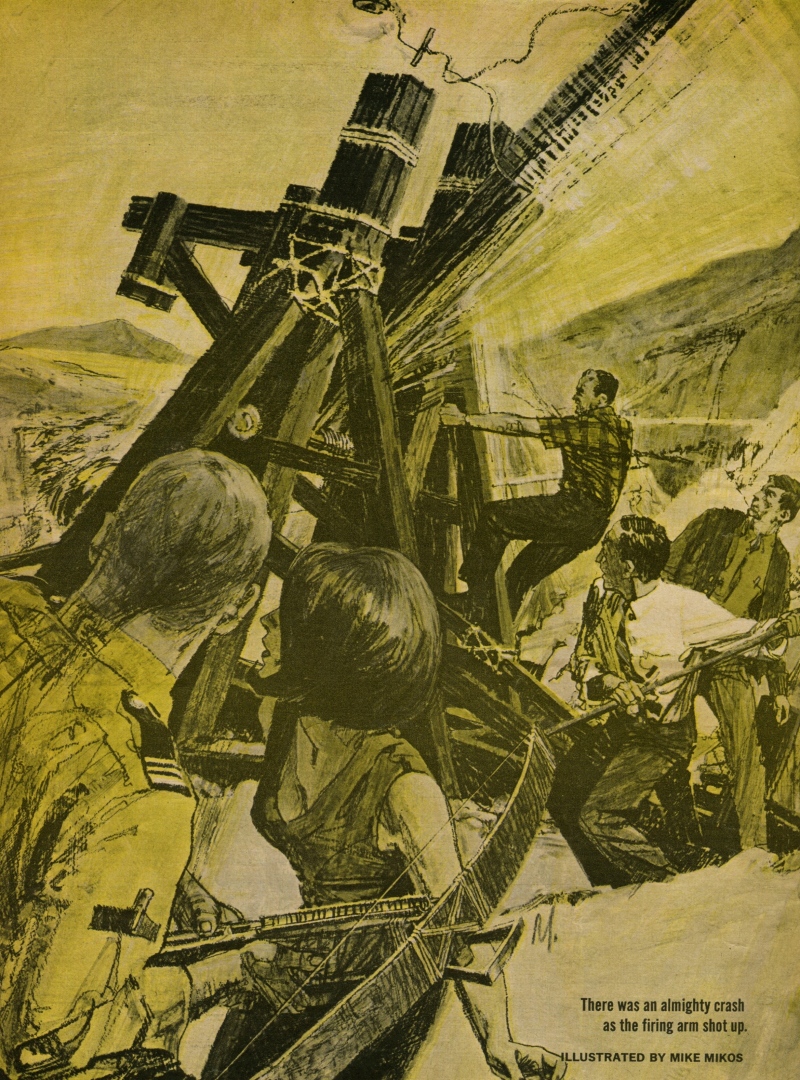 This article was originally posted on bagleysrunningblind.info on 13th July 2016 and migrated to thebagleybrief.com on 5th September 2016.