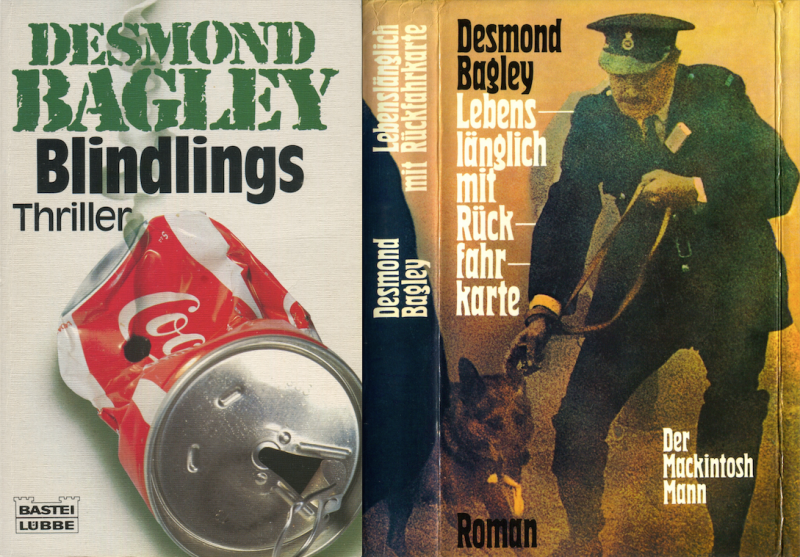 For some, as yet unexplainable, reason the cover of the 1985 German paperback edition published by Bastei Lübbe featured an image of a Coca-Cola can with a smoking bullet hole. The can, crushed with the ring pull half opened, might well give the impression that it could have been hit whilst being opened by a victim. The Coca-Cola slogan ‘Things go better with Coke’ seeming a little inappropriate in this instance.

I’m struggling to see the relevance of this book cover. There are mentions of Coca-Cola in some of Bagley’s other novels; it appears four times in Juggernaut, and once each in The Vivero Letter, The Tightrope Men and Bahama Crisis, but not at all in Running Blind.
One could perhaps postulate some theories:

That it represented the demise of the traditional Coca-Cola, as in 1985 when this edition was published the drink had been unsuccessfully relaunched with a new taste by the company Chairman and CEO Roberto C. Goizueta:

One of Goizueta’s other initiatives in 1985 was the development of a new taste for Coca‑Cola, the first change in formulation in 99 years. In taste tests people loved ‘New Coke,’ but it soon became clear that the wider public had a deep emotional attachment to the original, and they pleaded for a return to the traditional formula. Critics called it the biggest marketing blunder ever. Coca‑Cola listened, and the original product was returned to the market as Coca‑Cola Classic. [1]

Or that being of American origin the image might obliquely represent the American character ‘Wendell George Fleet (aka John Smith / Johhny) who shot the tyre of the protagonists Land Rover.

Or perhaps, as again unexplainably the character ‘Slade’ was renamed to ‘Cooke’ for the German editions, the Coca-Cola can is crushed in such a way as to show only the first two letters and part of the third, which might aim to give a visual representation of the name ‘Cooke.’ Though shot in the hand at one point in the novel ‘Cooke’ wasn’t holding anything and I expect the obfuscation of the product name in the image probably has more to do with Coca-Cola copyright infringement issues.

The truth is it’s a mystery and postulating theories, to borrow a Bagley phrase ‘butters no bloody parsnips’.

It is also unusual that in the ‘Slade’ sequel, The Freedom Trap published in German as Lebenslänglich mit Rüchfahrkarte (‘Life sentence with a return ticket’), also with the addition of Der Mackintosh Mann (‘The Mackintosh Man’) in the edition shown above, the characters name  ‘Slade’ remains unchanged. Why the name was changed solely for ‘Blindlings’ (Running Blind) is another mystery.

If anyone can help explain these two oddities please do.