Take a few moments to browse The Bagley Brief’s Running Blind archive, there is much to discover about Desmond Bagley’s seventh published novel, a Cold War espionage thriller set in Iceland. There is much to discover, whether you have a love of Desmond Bagley, Running Blind, Iceland or all three. With well researched and informative articles the site can also act as a travelogue for those people wishing to visit Iceland.

Running Blind, published in 1970, is a first person narrative espionage thriller set in Iceland. The protagonist Alan Stewart, an ex MI-6 agent is coerced into delivering a package to Iceland. Pursued across Iceland by the KGB, the CIA and British Intelligence Stewart’s mission becomes a fight for survival.

Running Blind was Bagley’s first espionage novel and the first of his published novels to be researched on location, the consequence of which is a story displaying a detailed authenticity of background. The spectacular landscape of this island in the middle of the North Atlantic, a land of light and darkness, has been captured and utilised by Bagley to great effect. This novel bears the Bagley hallmarks of skilful narrative and detailed research.

Start your journey through the archive here or select your preference from one of the topics below by clicking the title or the image.

Read more about the Bagley’s research trip to Iceland in 1969 and browse newspaper articles describing their visit.

There was nearly a movie adaptation of Running Blind, explore the background to this failed film adaptation and browse newspaper articles to discover the reasons why the project never made it past pre-production.

Discover the history of the television adaptation through contemporary media articles and follow the adaptation from its conception, through filming, broadcast, reviews and video release.

Explore the locations used during the filming of the television adaptation in 1978. Compare ‘then and now’ images and read a short history of each location.

Browse newspaper articles reporting on the filming of Running Blind from 1978 to 1980.

Browse newspaper articles reporting on the transmission of Running Blind from 1978 to 1980.

‘Whoever planned this has a mind like a pretzel, but it’s all of a piece‘ – A collection of miscellaneous articles and facts with links to Running Blind. 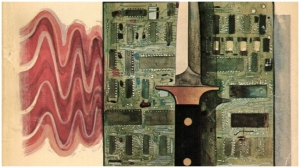 8. Image © HarperCollins Publishers Ltd / One Plus One Studio / Steven Stroud.