Stewart and Elín’s apartment was located in Lynghagi, Reykjavík not far from Reykjavík city airport. 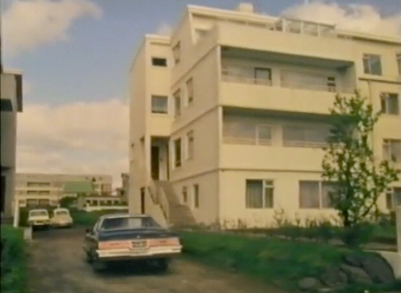 At the time of filming the apartment was the home of Vigdís Finnbogadóttir, former President of Iceland.

The following biographical extract was taken from The Vigdís Finnbogadóttir Institute of Foreign Languages website:

Vigdís Finnbogadóttir, the fourth President of Iceland, was the first woman in the world to be elected a constitutional Head of State. “President Vigdís”, addressed on a first-name basis according to Icelandic tradition, was first elected in 1980 to a four-year term, winning the election against three male contenders.

In 1984 she was re-elected without opposing candidates. In 1988 she won the presidency for a third term, with ninety-two percent of the votes against a female candidate. President Vigdís was returned to office unopposed for her fourth term, in 1992. She left office in August 1996, having taken the decision not to stand again.

Vigdís Finnbogadóttir was born 1930 in Reykjavík, She studied at the University of Grenoble and the Sorbonne in Paris where she studied literature and drama as well as at the University of Iceland. She has majored in English and French literature (with theatre literature of these two languages as a main theme), and has a degree in education. In 1972-1980 she was the Artistic Director of the Reykjavík Theatre Company (Leikfélag Reykjavíkur), later the City Theatre. In 1976-1980 she was a member of the Advisory Committee on Cultural Affairs in the Nordic countries (Chair from 1978-1980). [1]

At that time Vigdís was the artistic director of Leikfélag Reykjavíkur, in the old theatre by the lake called Iðnó. My parents were both actors there and I was working there as well and so was my husband. The company is now The Reykjavik City Theatre in Borgarleikhúsið. Vigdís was the one who suggested I audition for the role of Elín. [2]

On the day Running Blind was televised in Iceland, 23rd January 1980, an article appeared in Þjóðviljinn publicising the broadcast. The column alongside displayed an article about Vigdís Finnbogadóttir and her Presidential election campaign. The article may be viewed here.