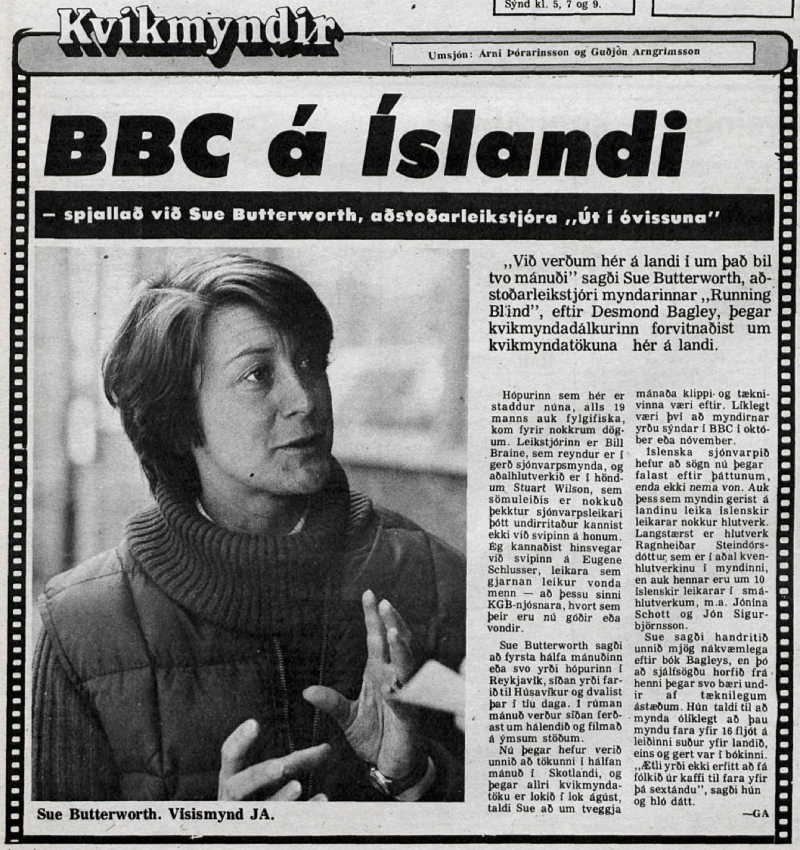 “We will be in this country for about two months,” said Sue Butterworth, production assistant for the film Running Blind, by Desmond Bagley, when the film correspondent inquired about the filming here in Iceland.

The group here at the moment, a total 19 people and accompaniment, arrived a few days ago. It is directed by Bill Braine, who is experienced in making television films and the lead role is in the hands of Stuart Wilson, who is a well-known television actor, although I didn´t personally recognise him. I did, however, get a glimpse of Eugene Schlusser, an actor who likes to plays bad characters – this time a KGB spy, whether they are now good or bad.

Sue Butterworth said that the group would stay in Reykjavík for the two weeks or so, then go to Húsavík and stay there for ten days. For about a month, they will then travel around the highlands and film in various places.

Filming has already been going on for half a month in Scotland, and when all the filming is finished, by the end of August, Sue reckons there will be about two months of editing and technical work remaining. It is likely that the BBC would show the series in October or November.

Icelandic television has reportedly already been seeking transmission rights, which appears hopeful. In addition to the film taking place in this country, Icelandic actors play several roles. By far the biggest is the role of Ragnheiður Steindórsdottir, who is the main female character in the film, but in addition to her there are about 10 Icelandic actors in smaller roless, including Jónina Scott and Jon Sigurbjörnsson.

Sue said the screenplay is very closely based on Bagley´s book, but of course, altered slightly due to technical reasons. She said, for example, she considers it unlikely that they would cross 16 rivers on their way south across the country, as was done in the book.

“I guess it would be hard to get people away from their coffee to go over the sixteenth,” she said laughing heartily.