‘Buy a summerhouse at Þingvallavatn and set fire to it –
Conditions for filming the Bagley film taking place in the summer’. 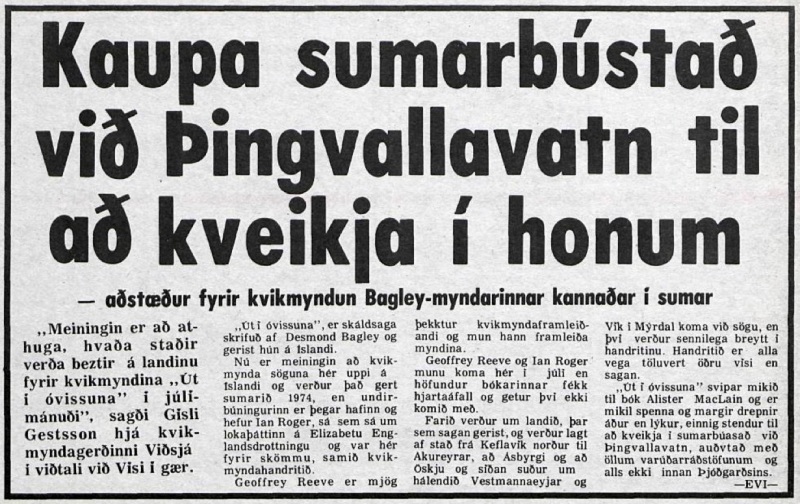 The intention is to check, in July, what locations in the country would be suitable for the film ‘Out into the unknown’.

said Gísli Gestsson when speaking with the Vísir film reporter in an interview yesterday.
Out into the unknown is a novel by Desmond Bagley and is set in Iceland.

They intend to film the story up here in Iceland, which will take place in the summer of 1974, but preparation is already underway and Ian Rodger, who has just finished Elizabeth R and was here recently, has written a film script.

Geoffrey Reeve is well known film maker and will produce the movie.
Geoffrey Reeve and Ian Rodger will come here in July, but the author of the novel had a heart attack and cannot now come along.

A tour of the country, where the story takes place, will be made from Keflavík to Akureyri, Ásbyrgi and Öskju  and then south through the highlands and Westmann islands and Vík in Mýrdal. The script has not yet been finished and differs from the novel.

Out into the unknown is similar to the books written by Alistair MacLean, high voltage with many people being killed before the end, they also plan to set fire to a summer house at þingvallavatn, of course with all the necessary precautions and not within the park itself.
EVI