‘Someone could break their ankle in the lava’. 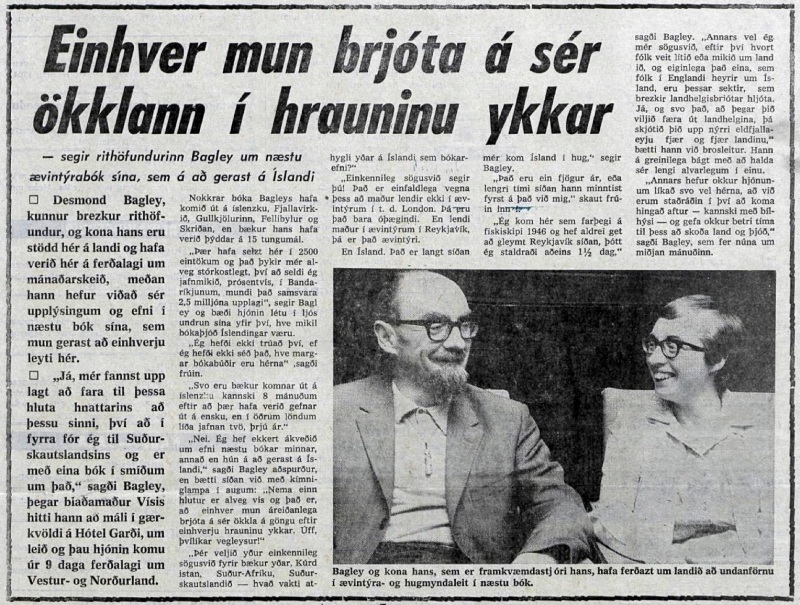 Says the writer Bagley whose next adventure novel, which will take place in Iceland.

Desmond Bagley, a prominent British writer, and his wife are currently in this country and have been here a month traveling around the whole time where he has amassed the information and content for his next book, which will happen to some extent here.

“Yes, I found this the perfect time to visit this part of the planet at this time, because last year I went to Antarctica researching the current book I am writing,” said Bagley, when the Vísir reporter met to speak with him last night at the Hótel Garði, (Hotel Garður Hringbraut 29, 101 Reykjavík) where the couple had returned from 9 days traveling around the West and North.

Several books by Bagley have been published in Icelandic, Fjallavirkið (High Citadel), Gullkjölurinn (The Golden Keel), Fellibylur (Wyatt’s Hurricane) and Skriðan (Landslide), and his books have been translated into 15 languages.

“They have sold 2,500 copies here and that to me is quite amazing, because if I sold as much, by percentage, in the U.S., it would match the 2.5 million circulation”, says Bagley and both the couple expressed their amazement at how much of a book nation the Icelanders were.

“I would not have believed it if I had not seen it, how many book shops there are here,” said his wife.

“So, the books come out in Icelandic maybe 8 months after they have been published in English, but in other countries it’s about two, three years.”

“No, I have not decided on a plot for my book, other than it’s supposed to happen in Iceland,” said Bagley when asked, and then added with humorous flash in his eyes, “Except one thing is quite sure, someone will certainly break their ankle while walking on some of your lava. Off-road tracks, ouch! “

“You choose strange settings for your books, Kurdistan, South Africa, Antarctica – what attracted you to put Iceland in your book?”

“Oddly the setting chooses you! It is simply because one misses adventures when in London. Then it is just a nuisance. But the barren landscape around Reykjavík, it’s an adventure. But Iceland, It’s taken a long time for me to come to Iceland mind,” says Bagley.

“It was about four years or longer since he first mentioned it to me,” his wife added.

“I came here as a passenger on a fishing vessel in 1946 and although I only stopped for one and a half days in Reykjavík I have not forgotten it,” said Bagley. “Otherwise I choose my setting, depending on whether people know a little or a lot about the country, and really the only thing that people in England have heard of Iceland, is about these fines, the British receive for fishing in territorial waters. Yes, and when you want to expand your zones, you shoot up a new volcanic island further and further away from the country, “ he added with a wink. He clearly can’t stay serious for too long.

“Otherwise, we have both liked it here so much, we are determined to come back, maybe with a car, giving us more time to explore the country and its people,” said Bagley, who is now in the middle of the month.

Image Caption: Bagley and his wife, who is his manager, have traveled around the country in a recent adventure – conducting research for his next book.