‘Katla in Desmond Bagley’s next book’. 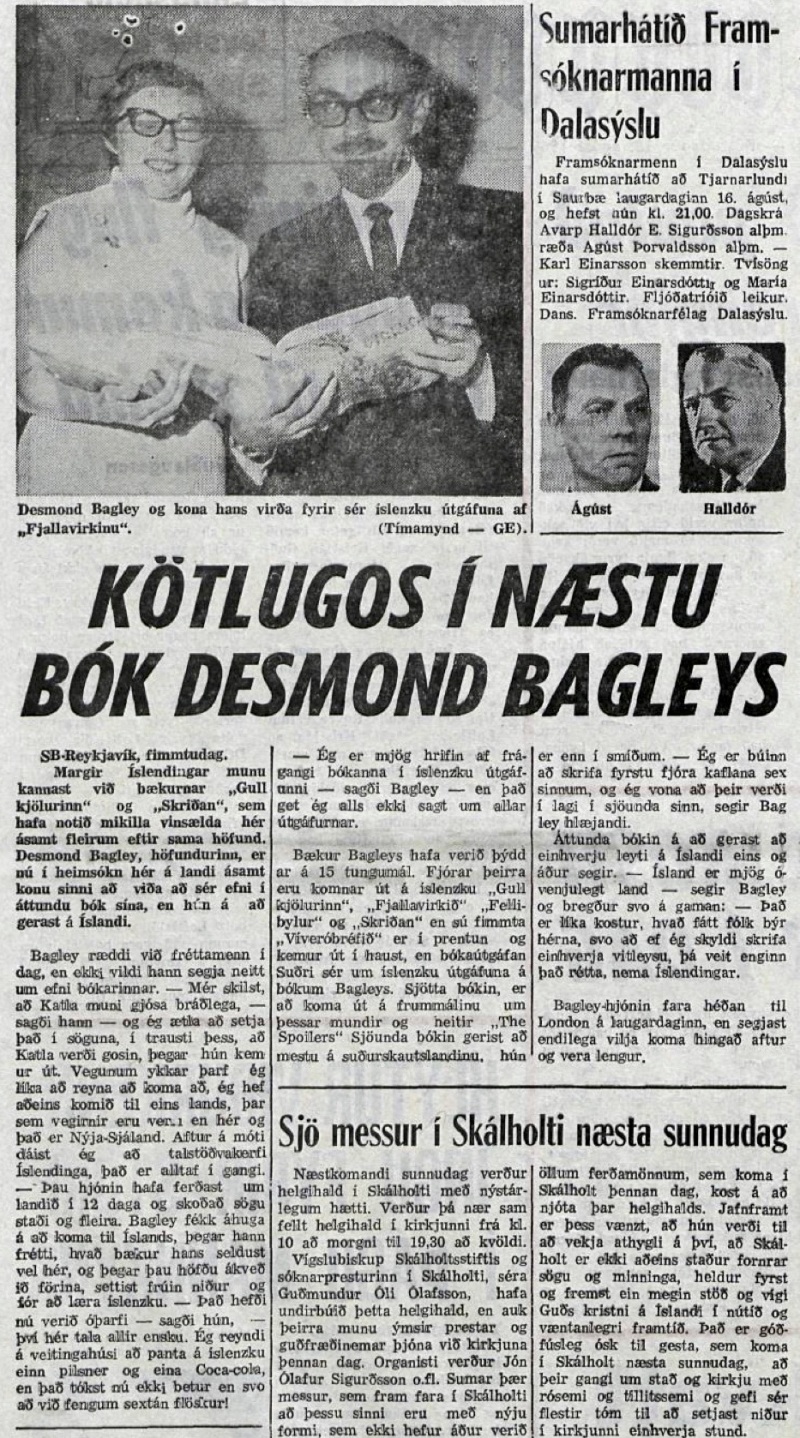 Many Icelanders will be familiar with the books Gullkjölurinn (The Golden Keel) and Skriðan (Landslide), which have enjoyed great popularity here amongst others by the same author. Desmond Bagley, the author, is currently visiting this country with his wife to research material for the eighth book, which is set in Iceland.

Bagley spoke with reporters today, but he did not say anything about the book. “I understand that Katla will erupt soon”, he said, and is going to put it in the story, he said in confidence that Katla will erupt, when the book comes out. “I have also travelled your roads, I’ve only been to one country where the roads are similar, which is New Zealand. On the other hand I admire the Icelandic radio system, it is always running”. The couple have traveled the country for 12 days and have seen historical sites and more. Bagley was interested in coming to Iceland, when he heard that his books sold well here, and when they had planned the trip, his wife had sat down and began to learn Icelandic. “It wasn’t needed though”, she said, “because the people here all speak English. I tried to order one beer and one Coca-Cola in a restaurant in Icelandic, but it did not work out so we got sixteen bottles!”

“I am very impressed by the finish of the Icelandic version of the books”, said Bagley, “but I can not say that for all versions”.

Bagley’s books have since been translated into 15 languages. Four of them have already been translated into Icelandic and published; Gullkjölurinn (The Golden Keel), Fjallavirkið (High Citadel), Fellibylur (Wyatt’s Hurricane) and Skriðan (Landslide) and the fifth  Víveróbréfið (The Vivero Letter) is in press and will be released in the fall, by ‘Suðri’ the publisher of the Icelandic version of the Bagley’s books. The sixth book is coming out in the original language at the moment and is called The Spoilers. The seventh book takes place mostly in Antarctica, it is still under construction. “I’m ready to write the first four chapters for the sixth time, and it is hoped that they will be okay for the seventh time”, Bagley says laughing.

The eighth book in set to some extent in Iceland, as noted above. “Iceland is a very unusual country,” says Bagley with a smile, “It is also helpful, because few people live here, so if I should write some nonsense, then nobody knows what is right, except in Iceland”.

Bagley and his wife leave here on Saturday to go to London, but said they really want to come back and stay for longer.