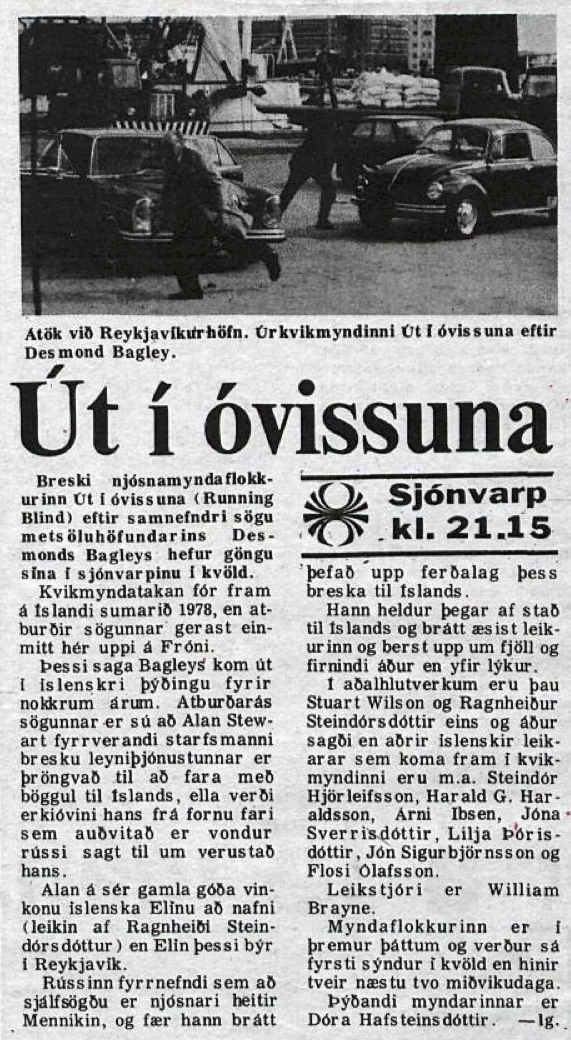 Filming took place in Iceland during the summer of 1978, and the events of the story take place right here in Iceland.

This Bagley story was published with Icelandic translation a few years ago. The storyline concerns Alan Stewart, a former employee of the British secret service, who is forced to take a package to Iceland. Otherwise, his old enemy, an evil Russian, will be told of his whereabouts.

Alan has an Icelandic girlfriend named Elín (played by Ragnheiður Stendórsdóttir) and Elín lives in Reykjavík.

The Russian is a spy named Kennikin, and he soon gets another chance to meet his old enemy when he travels from the UK to Iceland.

He immediately sets off for Iceland and soon the action gets exciting throughout the mountains and fjords before the end.

The main characters are played by Stuart Wilson and Ragnheiður Steindórsdóttir, as previously mentioned, but other Icelandic actors who appear in the film are Steindór Hjörleifsson, Harald G. Haraldsson, Árni Ibsen, Jóna Sverrisdóttir, Lilja Þórisdóttir, Jón Sigurbjörnsson and Flosi Ólafsson.

The Director is William Brain

The television series is in three episodes and the first one will be shown tonight whilst the other two are being shown over the next two Wednesdays.

The translator of the film is Dora Hafsteinsdótir.

21:15 Út í óvissuna [Running Blind]. British spy series in three episodes, based on the eponymous best-selling book by Desmond Bagley, which has been translated into Icelandic. Directed by William Brayne. Starring Stuart Wilson and Ragnheiður Steindórsdóttir. Appearing in this series are several Icelandic actors, including Steindór Hjörleifsson, Harald G. Haraldsson, Árni Ibsen, Jóna Sverrisdóttir, Lilja Þórisdóttir, Jó Sigbjörnsson and Flossi Ólafsson. The first episode. Alan Stewart, a former employee of the British secret service, is forced to deliver a packlage to Iceland otherwise his old arch-enemy, the Russian spy Kennikin, will be told where he can find his old friend and his Icelandic girlfriend, Elin, who lives in Reykjavík.