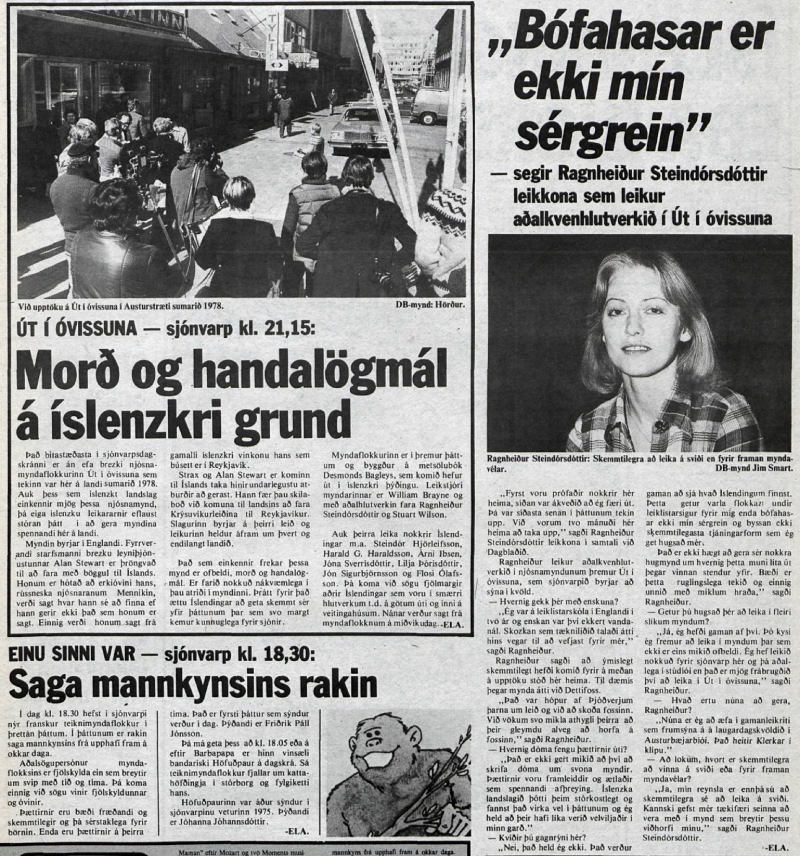 The most significant part of next week’s television schedule without doubt is the British spy series Út í óvissuna [Running Blind], which was filmed in Iceland during the summer of 1978. In addition to the Icelandic landscape that characterises this spy film are Icelandic actors who undoubtedly play a major part in making the film of interest in this country.

The story begins in England. A former employee of British intelligence, Alan Stewart, is forced to deliver a parcel to Iceland. He is threatened that his old enemy, a Russian spy named Kennikin, will be told his location if he does not do what he is told. Also he will be told where to find his Icelandic girlfriend, who lives in Reykjavík.

Immediately Alan Stewart arrives in Iceland strange events begin to happen. On arrival he is told to go to Reykjavík by way Krýsuvík. The fighting begins on this journey and the action continues across the country.
The film is distinguished by further violence, murder and fighting. This fairly accurately describes the rest of the film. Út í óvissuna received mixed reviews in the British press. Nevertheless, Icelanders should still be able to enjoy the series since so much is familiar.

The series is in three episodes and is based on Desmond Bagley’s best-selling book, which has been published with Icelandic translation. The film’s director is William Brayne and the main parts are played by Ragnheiður Steindórsdóttir and Stewart Wilson.

In addition to them several Icelanders are also involved, e.g. Steindór Hjörleifsson, Harald G. Haraldsson, Arni Ibsen, Jóna Sverrisdóttir, Lilja Þórisdóttir, Jón Sigurbjörnsson and Flosi Ólafsson. There are also many other Icelanders who were in smaller roles, e.g. on the streets outside and inside restaurants. More will be said about the series from Wednesday.
-ELA

Gangster action is not my speciality

First I rehearsed several scenes here at home, then it was decided that I would travel abroad to start filming. It was the very last scene in the series that was filmed first. We were filming for two months at home, said actress Ragnheiður Steindórsdóttir in an interview with Dagblaðið.

Ragnheiður plays the female lead in the three-part spy thriller Út í óvissuna, the show is televised this evening.

-How did you get on speaking English?

I was at drama school in England for two years and so English was not a problem. The Scottish spoken by the filming crew, did however puzzle me, said Ragnheiður.

Ragnheiður said that much fun had happened during the filming here at home. For example, when they filmed at Dettifoss.

There was a group of Germans heading out to see the waterfall. We created so much attention that they completely forgot to look at the waterfall, said Ragnheiður.

-How was the series reviewed abroad?

It is not really worth writing reviews about this type of show. The series was intended and produced as exciting entertainment. The Icelandic landscape was spectacular, and it worked well within the show and I think they have also been well-intentioned with regard to me.

-Are you anxious about criticism here?

No, I don’t think so. It will be interesting to see what the locals think. This can hardly be classified as drama victory for me as gangster action is not my speciality and and the gun is not the most fun form of expression I can think of. It’s not possible to have an idea of how it will look whilst the work is in progress. It’s done at great speed and out of sequence, said Ragnheiður.

-Can you imagine acting in other such films?

Yes, I would like that. Although I prefer to act in movies where there is not as much violence. I’ve acted a bit for television here, mainly in the studio, but it was very different from acting in Út í óvissuna, said Ragnheiður.

-What are you doing currently Ragnheiður?

Right now I’m rehearsing a comedy play to premiere on Saturday night at Austurbæjarbíoí. It is called Klerkar í klípu [‘Clergy in trouble’ original title See How They Run].

-Finally, which is more enjoyable, to act on stage or in front of the cameras?

Image title: Ragnheiður Steindórsdóttir: more fun to play on stage than in front of the cameras.