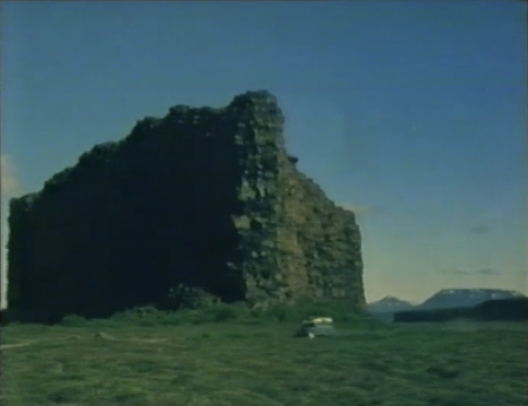 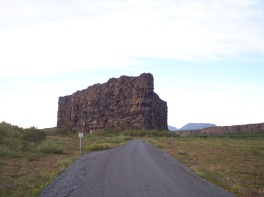 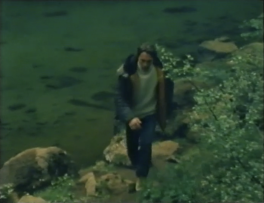 The 3.5km long, 1.1km wide U-shaped depression was believed to have been formed during the massive floods of the Jökulsá river at the end of the last Ice Age, between eight and ten thousand years ago and  then again three thousand years ago. There is however another theory of how the canyon was formed.

Legend says that once upon a time Óðin, the highest of the Norse gods, was riding through the heavens. He rode through the air on his eight-legged stallion Sleipnir, among the Northern Lights in a star lit sky. The god was a little careless with the reins, riding high and low, not always looking where he was going, at one time he came a little too close to the earth, so that Sleipnir touched the ground with one of his eight hooves, treading down hard. This tore the surface and the earth collapsed underneath. The hoof-print left by Sleipnir is clearly visible today, and is called Ásbyrgi (The Gods Bastion). [1]

Stewart and Elín appear to camp in the forest near the small lake, today a well-equipped campsite for tents, campers and trailers is located nearer the entrance to Ásbyrgi and the Visitor Centre. It is here that Stewart acquires Graham’s rifle and shoots at Slade’s Opel car making a hole in the windscreen.

The following extract appeared in the newspaper Dagur on 12th May 1978:

Car Hire firm Bílalelgu Akureyrar have been commissioned to supply the cars for the filming. Also that they provide a mechanic to change the windscreens as they will be shot at.

“The BBC has ordered 10 to 15 cars to be hired for a variable time. The film crew have asked that we get a new Opel and 2 or 3 Windscreens in addition. Also, we that we provide a long wheel based Land Rover with a radio and a refrigerator, as the story tells of a man who gets a beer out of the fridge on Sprengisandur” said Vilhelm Ágústsson one of the owners of car hire firm Bílaleigu Akureyrar.

Filming will take place in the North and the crew is expected to be in Iceland at the end of the month and will be filming for over a month. They are currently filming in Scotland. [2]

The article may be viewed here.